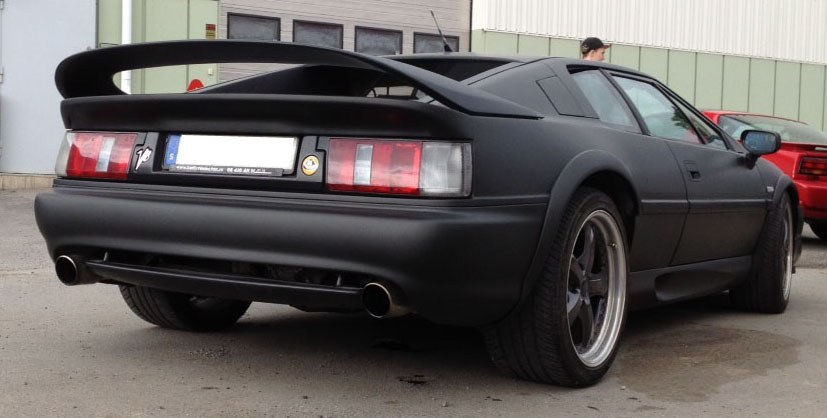 Not so long ago, we were approached by a gentleman who is really picky with his cars. He had with him a Lotus Esprit S4 V8 Twin Turbo that he had had some trouble with. Basically… the car (engine) did what it wanted to do rather than what the owner told it to do. Boost was irregular, idle was rough and high and it didn’t really feel ”crisp”. The goal was to get decent amount of power out of the engine, but it needed to be reliable and docile.

We put together a plan and went into production mode.

The engine had been upgraded with forged internals and put together with race specifications. It would cope with more power and most importantly, have good margins to the normal daily power output. The gearbox which normally is the weak link in these cars had also been upgraded massively. This beast could take on almost anything now. And when it did, the driveshafts broke, so they were also upgraded 🙂

We knew that the turbo pressure hadn’t been stable. The engine management was still stock and it wouldn’t be able to make the most out of the engine. We decided to replace it with a Haltech PS2000 stand-alone ECU.  The boost control was also taken over by the Haltech ECU as well as all the other stock sensors.

The stock injectors are not big enough for any kind of power. Even from the factory, these engines came with two additional injectors in the intake manifold to give enough fuel for the engine. We don’t like those type of solutions, we want the fuel to be injected as close to the combustion chamber as possible. We removed the stock injectors and installed 8 new technology injectors with extremely fast response times, making them perfect for idle and normal daily driving. To make sure that enough fuel was supplied, we dropped in two 300L/h in-tank fuel pumps in the OEM fuel pump position inside the tank. 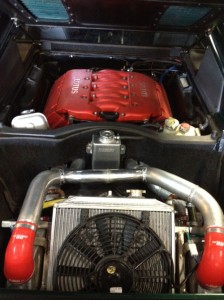 The turbos were not in the best condition so we decided to upgrade them to a set of Garret T28 dual ball bearing turbos. The installation is tricky since it is very limited space. That limited space also adds to the poor intake, turbo piping and exhaust system flow from factory. There’s a lot needed to be done here. We made the custom mounts and then built the rest of the airways to- and from the turbo’s in order to create the best possible flow.

Due to the limited amount of space, the turbos’ had to be mounted lower than the oil level in the oil sump. That meant that we had to build a complete oil scavenge system that pumps the oil away from underneath the turbo’s and route them in a proper way back to the engine, as well as incorporating an oil breather system.

These engines don’t have any sort cooling of the pressurized air coming out of the turbo’s and into the engine. In this car, the air is directed back to the boot where a dual sided water-to-air cooling system cools the air down to an acceptable level, before being sent into the intake manifold. Here have have also made sure that the air flow and pressure is adequately stabilized between the two engine banks, in order to get an even load on both halves of the engine.

Finally, all the mechanical work had been done. Now it was time to do create the best possible engine calibration with the Haltech ECU. The calibration (tuning) was made in such a way that the car should be able to be used in any situation, from normal driving to the supermarket for groceries, as well as intensive time-attack laps on the track, without any adjustments, buttons, knobs or other tricks. It just does what you want, when you want it. A lot of effort was also put into creating the best throttle response.

In spite of all the power modifications, during normal driving, the engine was running with better fuel economy compared to factory. The new injectors make sure that precise fuel amount is injected as requested and the Haltech ECU works with the factory O2-sensors in order to automatically reach optimal fuel mixture, regardless of ambient air temperature, ambient/barometric air pressure, engine temperature etc…

Boost pressure has been programmed to follow the throttle pedal with a linear character. Despite other high performance turbo cars, where turbo pressure comes ”all in”, here, if your driving with part throttle in a turn, you will only get the equivalent amount of boost as that part of the throttle represents. This gives a great driving experience and keeps the driver in control of the situation. Racers know that the key to a fast time at the track is a car that is easy to handle and that follows your commands to the smallest detail.

After tuning, at a modest 0,8bar of boost and pump gas (petrol), the engine made 500hp and 650Nm of torque. If needed, there is easily an additional 100hp to gain with more boost, and if that’s not enough, change the petrol to E85 and then there’s yet some more 🙂

Car has never run this smoothe, had this crisp throttle response and it’s really fast!

I agree, this is a really nice daily driver now and LOTS of fun!